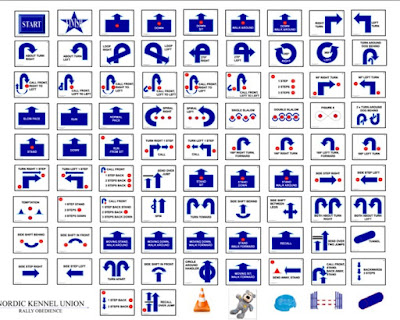 Why did I find that so exiting? Well, that’s a long story here presented in a very short version 😊 The idea about a Nordic Championship in rally was discussed in the DKK Rally Obedience Committee on an of, the first official recording I could find was in the minutes of a meeting 12th December 2016. Exactly 2 years ago, the 28th February 2017, a specific Nordic class was described, and the suggestion was later approved by DKK and presented in NKU. The first meeting in the NKU Rally Obedience Commission took place 13th July 2018 (!) and from then on things went fast!

In January 2019 we could announce that the first ever Rally Obedience Nordic Championship competition will be held in Sjællands Agility Center, 26th-27th October 2019 and a time schedule was presented for publishing relevant documents.

The exercises and the descriptions are of course an essential part of the Nordic Class and being able to publish them a very important milestone.

In Denmark a group Os der træner Rally Obedience Nordic Class for persons interested in practicing the Nordic exercises was opened today. Denmark, as the only Nordic country, have qualifying competitions based on the Nordic exercises, the first two in the weekend 11th-12th May in Roskilde. So, naturally the interest for learning the new exercises is great. When the interest of news has settled I think everyone will feel quite comfortable with the signs. Compared with the existing Danish signs only 10 additional exercises are introduced, none of them should be a challenge in my opinion.

How has the Nordic Class been received in Denmark? My feeling is, that by far most competitors are looking forward to the opportunity of qualifying for a Danish national team in Rally. Until date the major goals for Danish top-level teams have been: obtaining the title DKRSCH (Rally super champion), winning DM (Danish championship) and winning Årets Hund (Dog of the year) in Rally. To be part of a national team and fighting for a Nordic team title and an individual Nordic title is a great opportunity to further excel in Rally.

There have been a few hiccups, but they in no way can overshadow the fact, that an important milestone has been reached. Once more I would like to thank Solveig Therese Zetterstrøm, Beatrice Palm and Iiris Harju for their everlasting enthusiasm and engagement. We have done this together and I look so much forward to – together with you - finish the work and be part of the first championship ever in less than 8 months!

I really would have enjoyed celebrating with a glass of champagne yesterday evening, but I had to celebrate with Lille Bjørn and Max at a Heelwork Nerd course at Anja Christiansen, not a bad replacement at all, and it fortunately also resulted in a lot of joyful moments and bubbly feelings, but that belongs to another blog post 😊
Indsendt af Paul kl. 15.29